I finally got started on my “practice” kilt, which I’m planning to make more or less traditionally according to The Art of Kiltmaking. I’m using 10 ounce black cotton denim, which is not a traditional material. However, it’s a good deal less expensive than fine wool tartan, especially with a 50% off coupon at Jo-Ann Fabric. I want to get a feel for the process before going all-out.

It was after stitching the apron edge to the first pleat that I realized my calculations were going to result in shallower pleats than I'd like, so I'll have to regroup and re-mark the pleat lines and underapron. Dropping some pleats will make the remaining ones deeper (and make for less stitching.)

2011-12-11
After re-marking all of my pleats, I set about stitching them down. I finished two before realizing that 1) I had forgotten to add the "buttonhole" reinforcement to the second pleat and 2) I hadn't stitched through both layers of the next pleat. While keeping track of the pleat size, keeping tension on the pleat as you sew, and trying to keep the line straight and uniform, I forgot to go all the way through.

So, another evening's work ripped out. I'm optimistic that the third start will be the charm. One thing that seemed to be working quite well was the pleat template I had made: 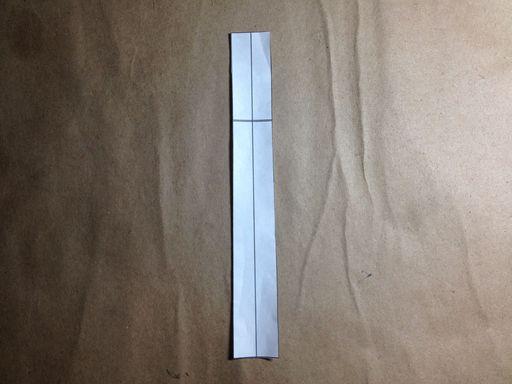 I figured a digital image with dimensions accurate to the hundredth of an inch would be better than trying to eyeball 32nds of an inch. I don't think I'll be able to use this with a tartan kilt, but for a self-colored one like this it seems helpful.

The other place I deviated from The Art of Kiltmaking's instructions was in pinning the entire length of the pleat before stitching; not just the waistline. Barbara Tewksbury has said that she in fact does this herself, but it's not included in the book because the book is intended to be representative of the very traditional, old school style of kilt making learned by her co-author in Glasgow in 1949. Pinning the length of the pleat was definitely a help in keeping everything lined up.

2011-12-15
I think I'm finally off to the races with my practice kilt. The "buttonhole" in pleat two is in place, and I've got the apron edge and three pleats stitched down with number four ready to go. 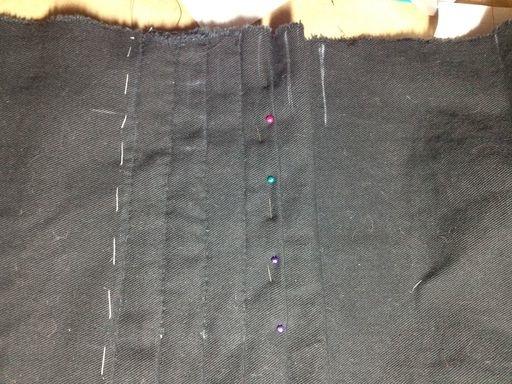 (Pardon the cat hair, it is unavoidable in this household!) Clearly not perfect, but showing slow improvement with each pleat. On the one hand, I think that working with tartan will actually make some aspects of sewing straight and well-aligned pleats easier; the frequent and perpendicular lines of tartan are like built-in graph paper. On the other hand, working with a dark, solid color will hide a multitude of sins. Not that I want to be lazy or shoddy, but this first time through is mostly about getting familiar with process for me, and I can live with some slight unevenness and imperfections if the end result fits and looks generally OK. 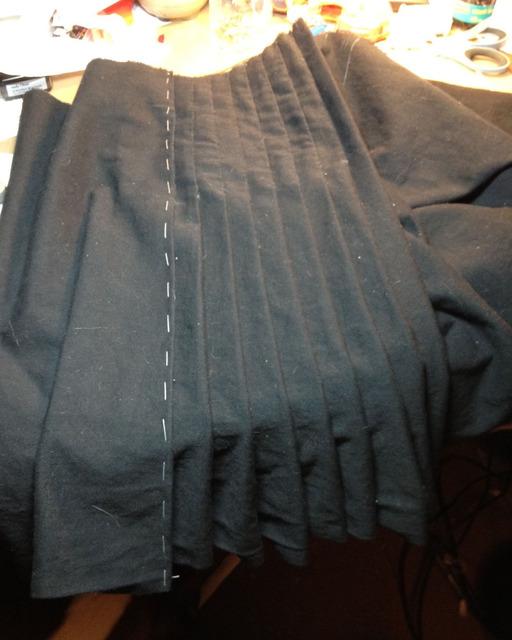 I'm becoming more and more convinced that a beginning kiltmaker is probably better served using tartan rather than trying to make a self-colored kilt. With no stripes against which to eyeball alignment, it's easy for things to get a little out of whack. I'm not going to tear out my pleats and start over (again, the solid color will hide a multitude of sins) but I'll know what to keep an eye out for during the rest of this kilt, and future ones I may make.

I've got 7 pleats stitched out of my total of 23. It's starting to look like a kilt! Observations so far:

2012-12-20
I've now sewn down 14 of 23 pleats. One of the things that seems a little bit vague on paper in The Art of Kiltmaking is what to do when you reach the end of your first 4-yard length of fabric (if you use double-width fabric, you'll be working with two four yard pieces instead of one eight yard piece), but by the time you get to that point, it becomes clear; fold the last pleat on your first piece of fabric, fold the first pleat on the second piece of fabric, and pin it up and sew just like any other pleat. The ends of the fabric get sewn together inside the fold later on.

As I said in a post on X Marks the Scot, I always try to walk the fine line between "Prepared to fail" and "Prepared to be pleasantly surprised" whenever I'm trying something for the first time. I've had a few people warn me that cotton doesn't hold pleats well (it may be necessary to stitch the edge of each pleat), and is prone to wrinkling and shrinking. I would expect all of those things to happen when running a kilt through the wash like a pair of pants, so as far as washing goes I'd probably opt for gentle agitation in the bathtub, squeezing (not wringing) and laying flat to dry... if it's a wearable garment and if I warm up to the solid black look to wear it frequently enough that care & feeding are an issue; I'm already thinking ahead to kilt #2, which will probably be made out of polyviscose tartan. I understand Marton Mills is a well-regarded and affordable source - specifically their Balmoral range. 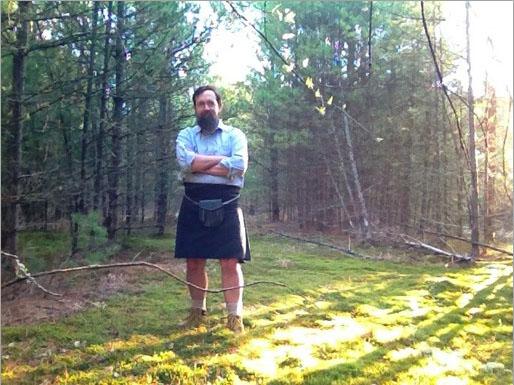 I finished my practice kilt Monday night. The last step was the lining, which I admit to rushing and fudging a bit. According to The Art of Kiltmaking, the back lining should curve gracefully and gather in several darts. The way I first sewed it on I only wound up with one dart - I think this is also partly due to there not being as much of a curve along the pleats because of how they were skewed. 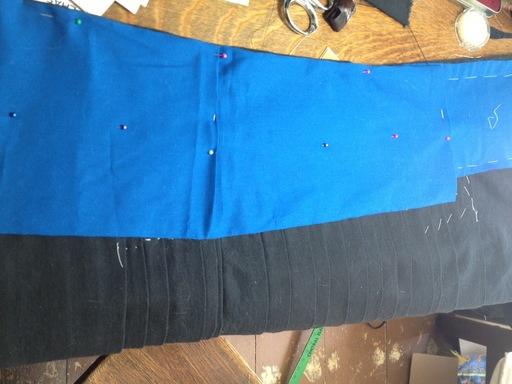 I haven't had it on for a long enough time to get a sense of how it may settle in, or what adjustments may work best. Overall I think the fit is really pretty good; it sits snug around my natural waist without any weird puckering or sagging, and the length seems pretty good. I may add half an inch to the length of my next one.

The pleats hang nicely despite all the issues I had with the fell: 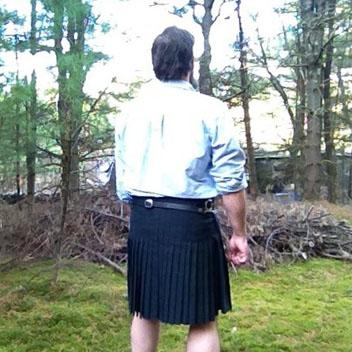 The biggest issue with the way the kilt turned out is the shaping of the apron. Early on I mentioned that I did not flare the apron lines, leaving them on a straight angle instead; I had read somewhere that the cotton fiber would not lend itself to as much shaping as wool or poly viscose. On the finished kilt, the result of this more conservative apron shaping is that the apron edge does not curve around and hang straight down at the inverted pleat, and it on the other side it "kicks" a little bit where the pleats start; it wants to curve forward slightly and pulls the first couple of pleats open a bit. (That may also be due to my deep pleat being a bit skimpy.) It's not catastrophic given the all-black appearance, and now I have a much better understanding of how the apron shape, deep pleat and inverted pleat work on a finished kilt. If I had angled the apron edges out another inch or so it might have done the trick.