A few years ago i had a period when i went through a series of bikes i set up in different ways trying to make the best (for me) commuting set up. They were largely 70-80s road bikes; some Raleighs, a Peugeot, a Lotus, a couple of Schwinns, and others with no markings at all, truly UJBs.

I liked the style of the 70s bikes best, when bikes had real headbadges, Raleighs were built in Nottingham, French bikes had real style, and the Japanese were proving they could build any of those cheaper AND better (before everything just got cheaper after the bike boom was dead in the mid-80s). As i went through different bikes, i narrowed down my requirements to something that is reasonably quick and stable, fenderable, and has room for at least 32mm tires. That seems simple, but that removes a lot of bikes, especially many modern bikes without such room.

Eventually i gave up the idea of having a separate 'beater' commuter bike and just rode my Surly Crosscheck as my primary bike. It's a real chameleon and has done equally well in cyclocross racing and daily commuting, and seasonally changing it over for racing or winter riding satisfied the itch to keep building more bikes. It was a singlespeed for a long time, and then i added an 8-speed cassette in the back, and it'll likely stay as a 1x8 for a while now.

Then i got this 2-speed automatic hub earlier this spring, and that got me thinking about something sort of like the Raleigh 3-speed that's always ready to ride, but with the agility of a decent road bike. It should have a dyno hub and lights (like i have on my Surly), and a saddlebag, or maybe a front rack. I remember really liking how nicely that Peugeot UO-8 had ridden. The French had a nice take on geometry even if they were stubborn about keeping their own part sizes well into the 70s.

This plan simmered for a few months while i was busy on the house, then when i was at my friends' shop last week i asked if they had any large French road bikes around. They had this one:

It's not a high-end bike, but it might be ideal for this project. It's a Motobecane, with a beautiful fork and even more beautiful use of standard European-sized parts. It was dirty, but the important bits (bottom bracket, headset) were fine, and i replaced most everything else anyway. That picture is the after shot, with wheels borrowed from another bike, and brakes, cranks and pedals and saddle from my parts pile. Those aren't the wheels i'm keeping on the bike, but that's the topic for the next project blog. The stem and bars polished up beautifully, which is a little sad because i'll need at least a longer stem for it to fit me well. 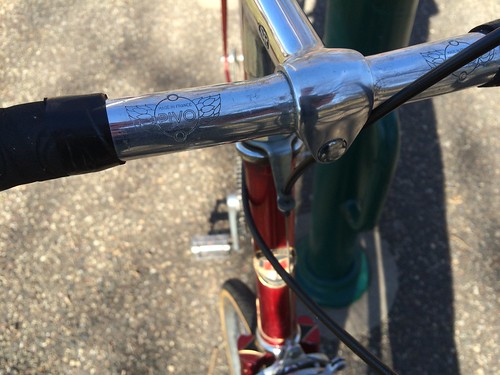