My next project this summer has been an unexpected bathroom remodeling, done over the past week. My only bathroom in the house.

I've had a small but persistent leak into the basement from the 2nd floor bathroom for a few months, but kept pushing it off because it never seemed too bad, just a few drips. Then a couple of weeks ago i happened to be in the basement when someone was draining the bathtub and it wasn't quite a stream, but fast enough dripping that it was obviously a problem that needed fixing.

This is the bathroom before, mostly, after removing the toilet and a wall cabinet. I loved the original maple floors in there, but after 100 years there were a couple of areas of dry rot, and the toilet always rocked because the wood beneath it was shrunken from repeatedly being wet. 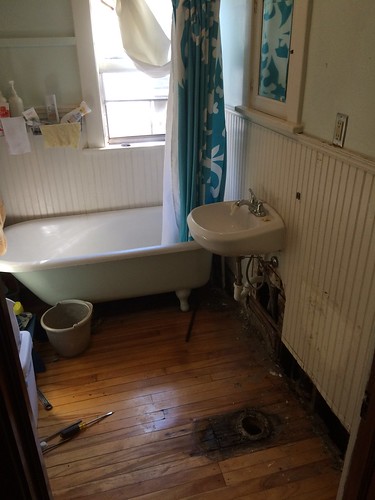 With the fixtures out i opened up the floor to find the problem. The sink connection was always a little hinkey, and i assumed the problem was the sink drain connection into the tub line, but that was fine. 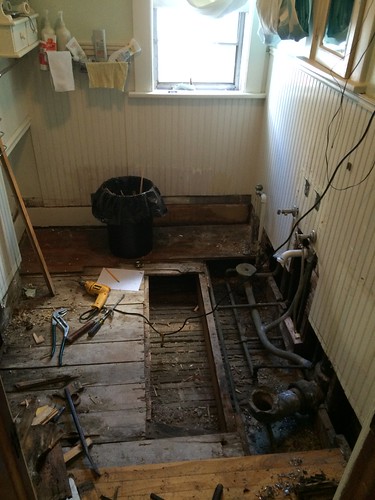 The real culprit was the drum trap at the left side. The cleanout cap was corroded on a couldn't be removed, so i still don't know if it was leaking or just overflowing. Either way, it's getting replaced with a modern PVC and p-trap system. Happily, since it's an old and drafty house i didn't find any evidence of mold or mildew in the floor or wall, just the wet plank under the trap. 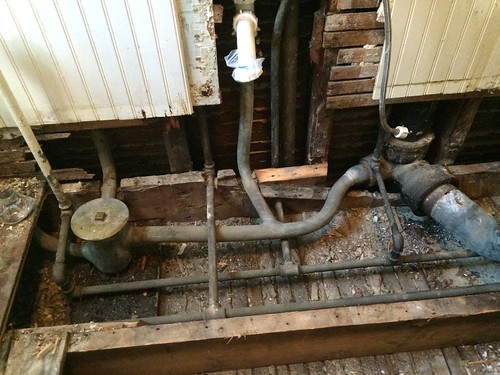 The (presumably original 1909) lead bend was interesting, and had a cool sticker underneath it. The less cool part was how the flange was built into the pipe, so it gave no support to the toilet once the wood floor gave up. It also meant a lot of monkeying around to find a combination of PVC pipe and flange that would work in that space and while aiming for the same finished floor height. 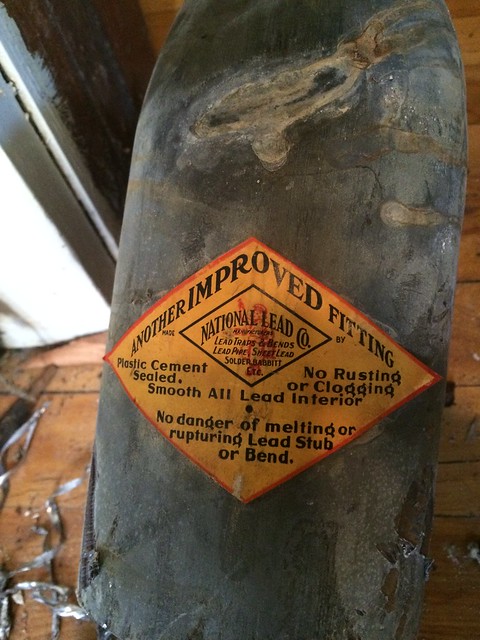 I'll spare the details of the rest of the interim steps, but suffice it to say that it can get complicated connecting new and old plumbing parts. Shout out to Gopher Plumbing, who helped figure out the correct connection between a clawfoot bathtub and modern PVC drain trap connection (those tubs uniquely have 1 3/8" pipe).

I knew i'd use tile, and have always loved the classic look of small hex. Budget precluded spending almost $700 on the marble version, but this 1" porcelain looks pretty great with black grout. Here's the finished floor, just waiting for the grout to set so i can start reinstalling fixtures. 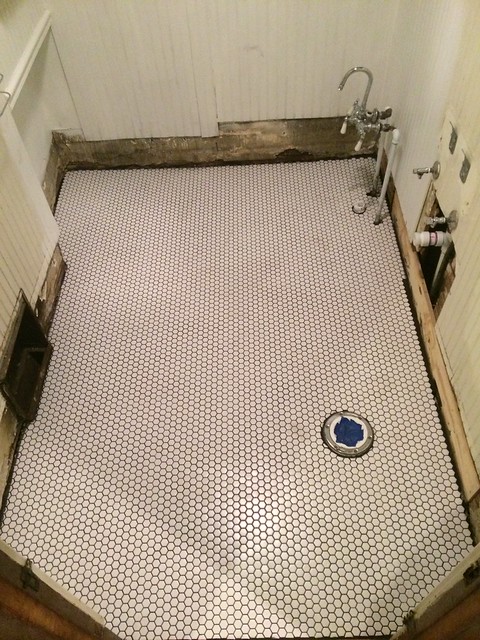 It was 3 full days (one with my brother helping), and 3 evenings of work to get to this, with about a day and a half of work remaining to paint and replace all the trim and install everything. We had 6 mornings without a bathroom, and i've rarely been happier to live across the street from a coffee shop.