My major projects for the summer have been to build a new kitchen table for my mom, and continued work on the TR6 that began over the winter.

The table was a christmas gift, she's talked about replacing her old table since beginning her kitchen modeling project last year, and also a project i wanted to try building. We went back and forth early in the spring with design ideas and settled on a small 3'x3' top with a 2'x3' leaf at one end.

Her older table was always a bit large, so she wanted something small but that could also accommodate craft and sewing projects, so the one-ended drop leaf was a good solution. It has folding legs under the leaf so she can easily expand or collapse it herself, no need to store a leaf separately, and the table was meant to be against a wall anyway.

It's all solid maple, with most of the wood coming from my very good friend Mike, who happened to have several nice pieces left over from other projects, and donated it to the table. He also has a small planer, so we were able to get everything uniform thickness. I bought the leg stock separately, also in hard maple.

I've never glued up a panel like this before, and it went well, but i'm glad i started with the leaf, as i learned a lot about clamping and alignment before tackling the main top. I also learned that scraping tops is cool, and much, much easier when the glue joints are really really even from the start.

Here's the final table, finished with a medium gel stain and a tough oil urethane finish, full size with leaf up. 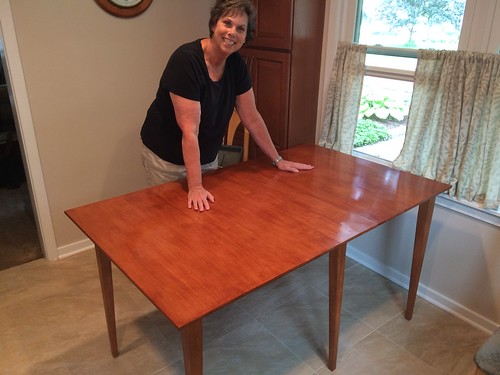 And here it is in more typical daily use, leaf down, enough room for the newspaper, breakfast and coffee. 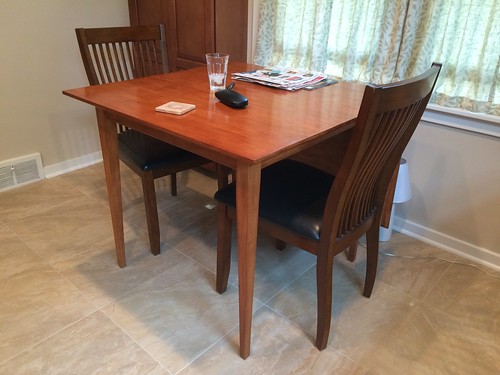